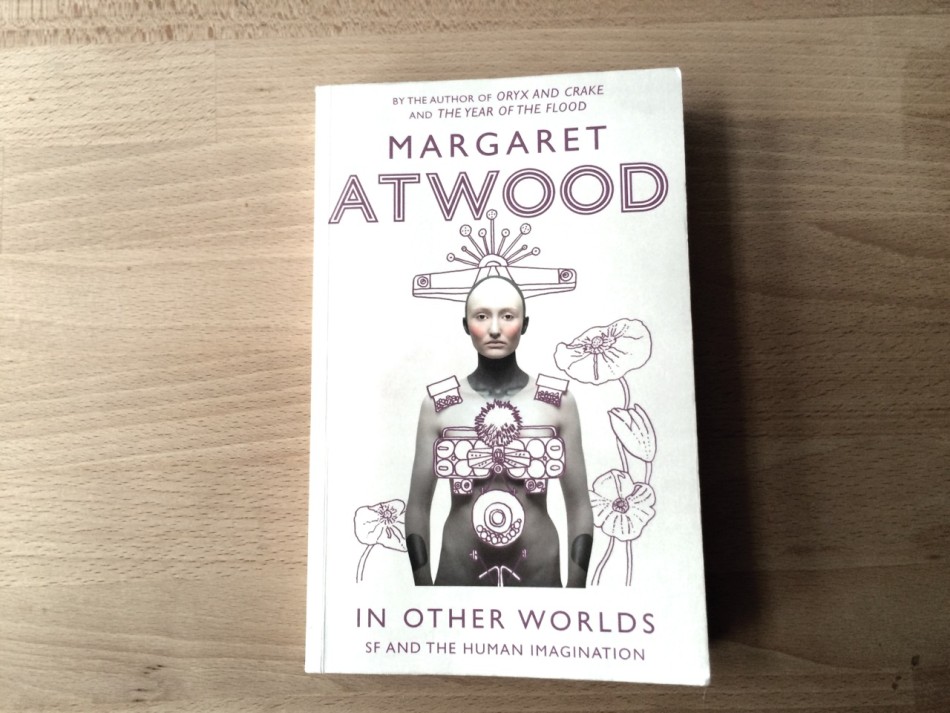 Atwood, Margaret. In Other Worlds: Science Fiction and the Human Imagination. London: Virago, 2012.

In Other Worlds is a collection of essays through which Margaret Atwood reveals details of her “lifelong” relationship with science fiction (SF) and other related literary forms both as a reader and an author. Margaret Atwood had been using the term “speculative fiction” in describing the three full-length fiction novels she had written, The Handmaid’s Tale, Oryx and Crake, and The Year of the Flood. Atwood’s choice of terms was then strictly criticized by the SF writer Ursula K. Le Guin in an article she wrote in the Guardian, which sparked a debate among the two and other SF authors over the true definition and borders of the genre SF. In Other Worlds, curiously enough, is dedicated to Ursula K. Le Guin. A large portion of the book seems to be Atwood’s answer to Le Guin, elucidating where Atwood places the somewhat permeable borders between SF proper, speculative fiction, fantasy and other literary forms.

Margaret Atwood: “To date, I have written three full-length fictions that nobody would ever class as sociological realism. […] Are these books “science fiction”? I am often asked. Though sometimes I am not asked, but told: I am a silly nit or a snob or a genre traitor for dodging the term because these books are as much “science fiction” as Nineteen Eighty Four is, whatever I might say. But is Nineteen Eighty-Four as much “science fiction” as The Martian Chronicles? I might reply. I would answer not, and therein lies the distinction.”[1]

Ursula K. Le Guin: “To my mind, The Handmaid’s Tale, Oryx and Crake and now The Year of the Flood all exemplify one of the things science fiction does, which is to extrapolate imaginatively from current trends and events to a near-future that’s half prediction, half satire. But Margaret Atwood doesn’t want any of her books to be called science fiction. In her recent, brilliant essay collection, Moving Targets, she says that everything that happens in her novels is possible and may even have already happened, so they can’t be science fiction, which is “fiction in which things happen that are not possible today”. This arbitrarily restrictive definition seems designed to protect her novels from being relegated to a genre still shunned by hidebound readers, reviewers and prize-awarders. She doesn’t want the literary bigots to shove her into the literary ghetto.”[2]

Margaret Atwood: “What I mean by “science fiction” is those books that descend from H.G. Wells’s blood-sucking Martians shot to Earth in metal canisters—things that could not possibly happen—whereas for me, “speculative fiction” means plots that descend from Jules Verne’s books about submarines and balloon travel and such—things that really could happen but just hadn’t completely happened when the authors wrote the books. I would place my own books in this second category: no Martians.”[3]

Ursula K. Le Guin: “I’ve been needling Maggie [Margaret Atwood] for years now. “Come on, Maggie, you do. You know you write science fiction.” She’s in a difficult position, obviously, with her publisher. She herself has sort of redefined science fiction to be “what Margaret Atwood doesn’t write.” That’s OK, because Margaret Atwood really can do no wrong in my book. But I do keep arguing with her, because it doesn’t really hold water, her definition. Science fiction is not about the impossible, the nonexistent — that’s fantasy. And she says that she only writes about what is possible, and so on. Well, a lot of science fiction does exactly that.”[4]

Margaret Atwood: “In a public discussion with Ursula Le Guin in the fall of 2010, however, I found that what she means by “science fiction” is speculative fiction about things that really could happen, whereas things that really could not happen she classifies under “fantasy.” Thus, for her—as for me—dragons would belong in fantasy, as would, I suppose, the film Star Wars and most of the TV series Star Trek. Mary Shelley’s Frankenstein might squeeze into Le Guin’s “science fiction” because its author had grounds for believing that electricity actually might be able to reanimate dead flesh. And The War of the Worlds? Since people thought at the time that intelligent beings might live on Mars, and since space travel was believed to be possible in the imaginable future, this book might have to be filed under Le Guin’s “science fiction.” Or parts of it might. In short, what Le Guin means by “science fiction” is what I mean by “speculative fiction,” and what she means by “fantasy” would include some of what I mean by “science fiction.” So that clears it all up, more or less. When it comes to genres, the borders are increasingly undefended, and things slip back and forth across them with insouciance. Bendiness of terminology […] has been going on in the SF world for some time. For instance, in a 1989 essay called “Slipstream,” veteran SF author Bruce Sterling deplored the then-current state of science fiction and ticked off its writers and publishers for having turned it into a mere “category.””[5]

Bruce Sterling: “At one time, in its clumsy way, Science Fiction offered some kind of coherent social vision. SF may have been gaudy and naive, and possessed by half-baked fantasies of power and wish-fulfillment, but at least SF spoke a contemporary language. Science Fiction did the job of describing, in some eldritch way, what was actually happening, at least in the popular imagination. […] I want to describe what seems to me to be a new, emergent “genre,” which has not yet become a “category.” This genre is not “category” SF; it is not even “genre” SF. Instead, it is a contemporary kind of writing which has set its face against consensus reality. It is a fantastic, surreal sometimes, speculative on occasion, but not rigorously so. It does not aim to provoke a “sense of wonder” or to systematically extrapolate in the manner of classic science fiction. Instead, this is a kind of writing which simply makes you feel very strange; the way that living in the late twentieth century makes you feel, if you are a person of a certain sensibility. […] We will call these books “slipstream.” […] These are books which SF readers recommend to friends: “This isn’t SF, but it sure ain’t mainstream and I think you might like it, okay?” […] It seems to me that the heart of slipstream is an attitude of peculiar aggression against “reality.” These are fantasies of a kind, but not fantasies which are “futuristic” or “beyond the fields we know.” These books tend to sarcastically tear at the structure of “everyday life.””[6]

Margaret Atwood: “What they [slipstream books] have in common is that the kinds of events they recount are unlikely to have actually taken place. […] But surely all draw from the same deep well: those imagined other worlds located somewhere apart from our everyday one: in another time, in another dimension, through a doorway into the spirit world, or on the other side of the threshold that divides the known from the unknown. Science Fiction, Speculative Fiction, Sword and Sorcery Fantasy, and Slipstream Fiction: all of them might be placed under the same large “wonder tale” umbrella.”[7]