Do different patterns and materials affect the capacity of knitted capacitors and if so in which way?

Various tests of knitted capacitors within the following frame conditions: The capacitors were knitted with an electronic knitting machine (Brother KH-930), the capacitor samples have a fixed size of 48 rows and 48 stitches.

The materials used in the tests are the following: copper wire, silver thread (7×1 Karl Grimm) and normal/nonconductive (polyester/acrylic) thread. 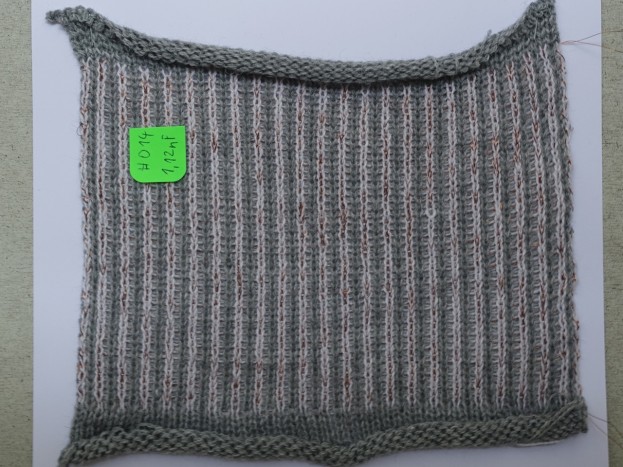 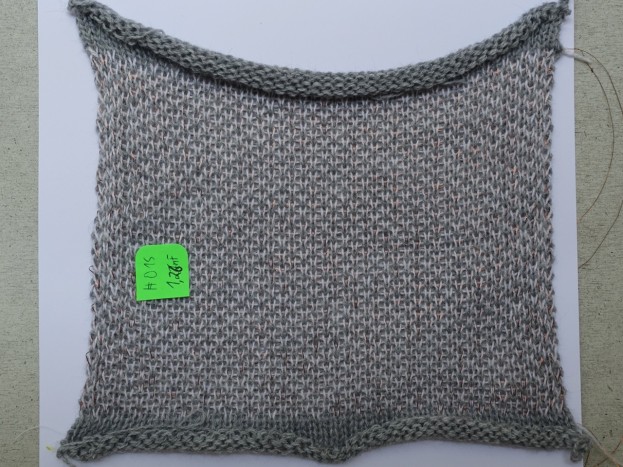 Measuring these two samples, it becomes clear that the pattern affects the capacity value. Assuming that the reason for the different capacity values is the difference in how tight the two copper wires are knitted together, the following two tests are conducted to test that assumption.

2. Test
The patterns are similar to the one used in the previous tests, but every stitch/color is repeated. These patterns show no significant difference in the capacity values. Also, the capacity of #15 is stil higher. 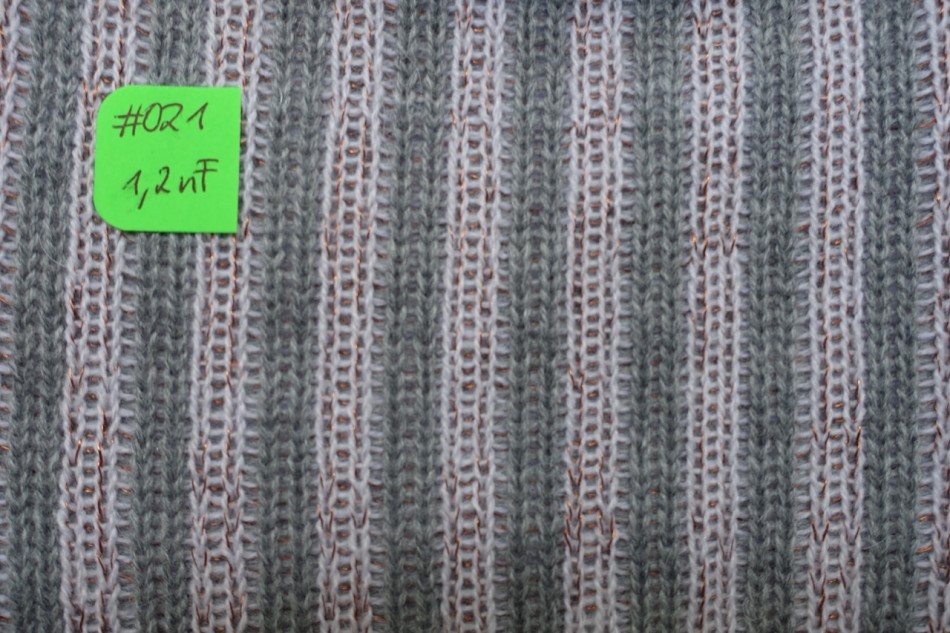 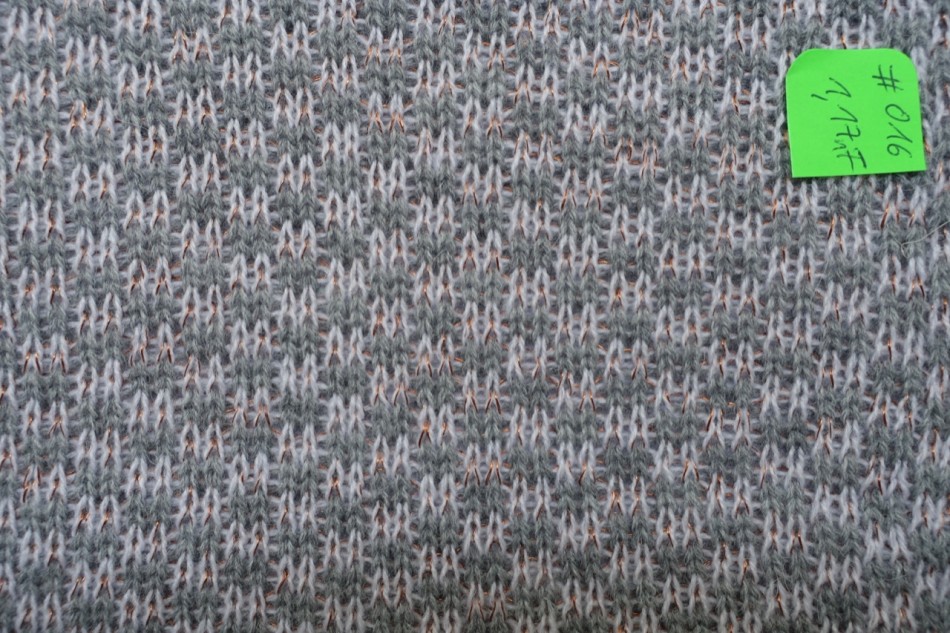 3. Test
In the next test, we tried out a pattern in which more stitches with wires are left out, so that the lines in the back get longer.
The capacity is clearly smaller (about 820 pF). 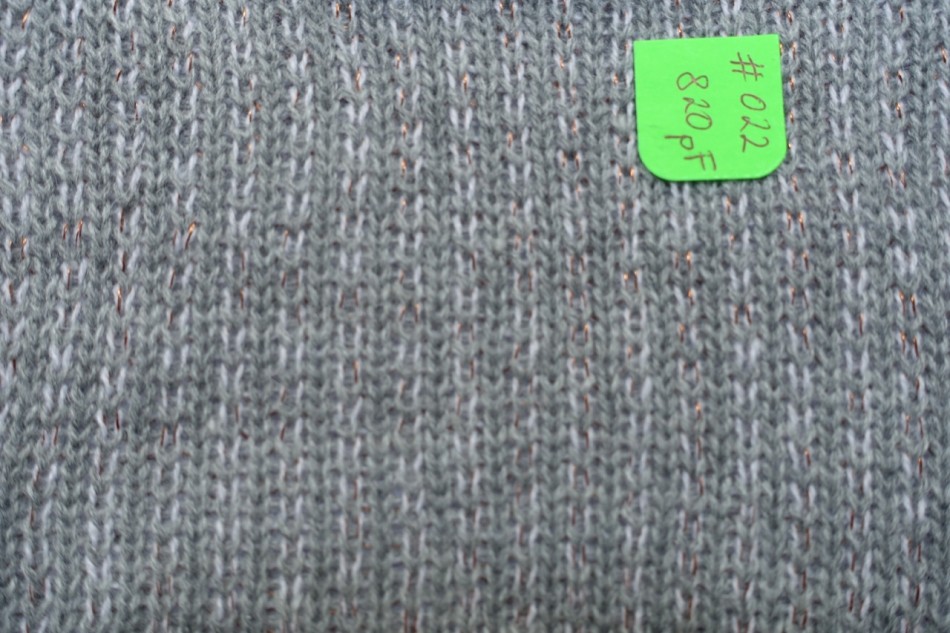 4. Test
Based on the same amount of conductive material (4m of copper wire), we measured the capacity of twisted copper wires and two different patterns. 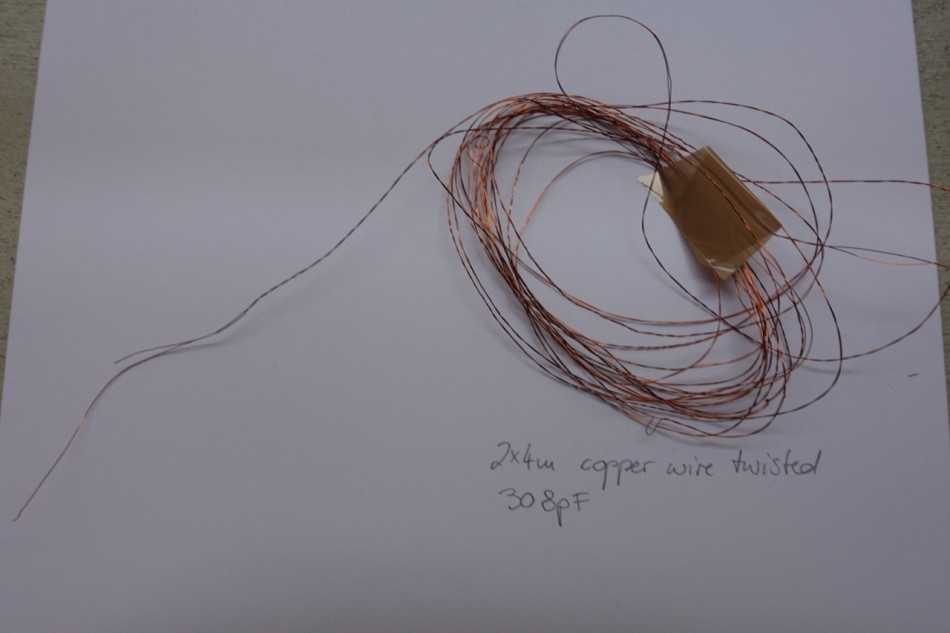 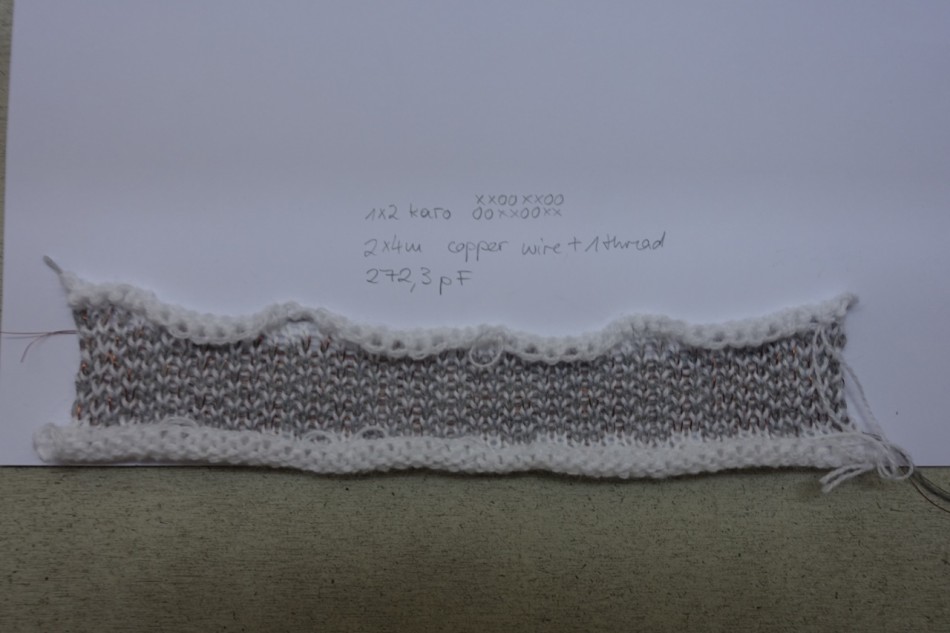 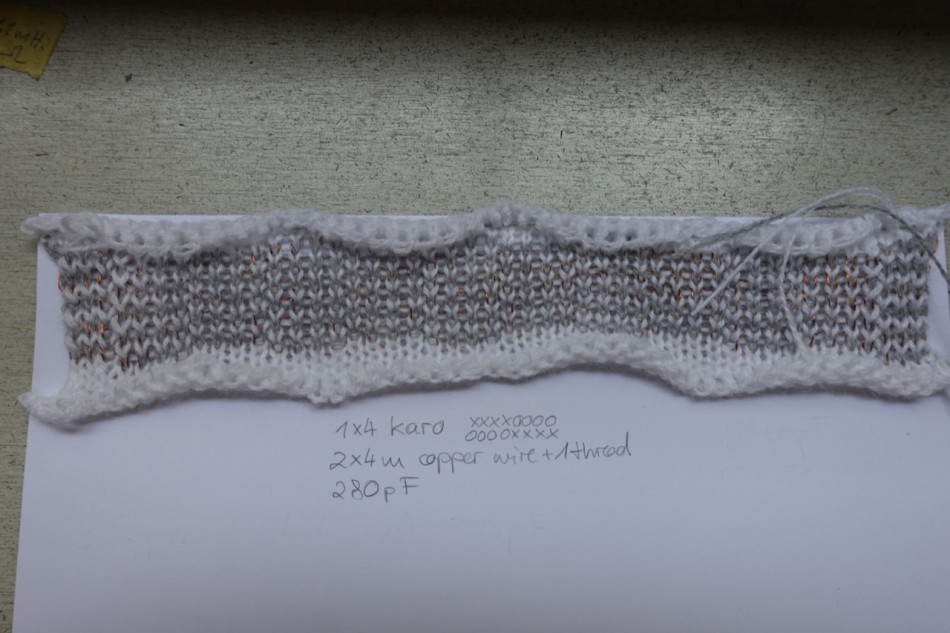 The capacitor with two twisted copper wires has the higher capacity. Also, longer/flat lying wires cause a better capacity, but on the other hand, it uses less less conductive material in the pattern.

5th test
Trying to knit the wires tighter together and using as much conductive material as possible within the 48 rows and 48 stitches. 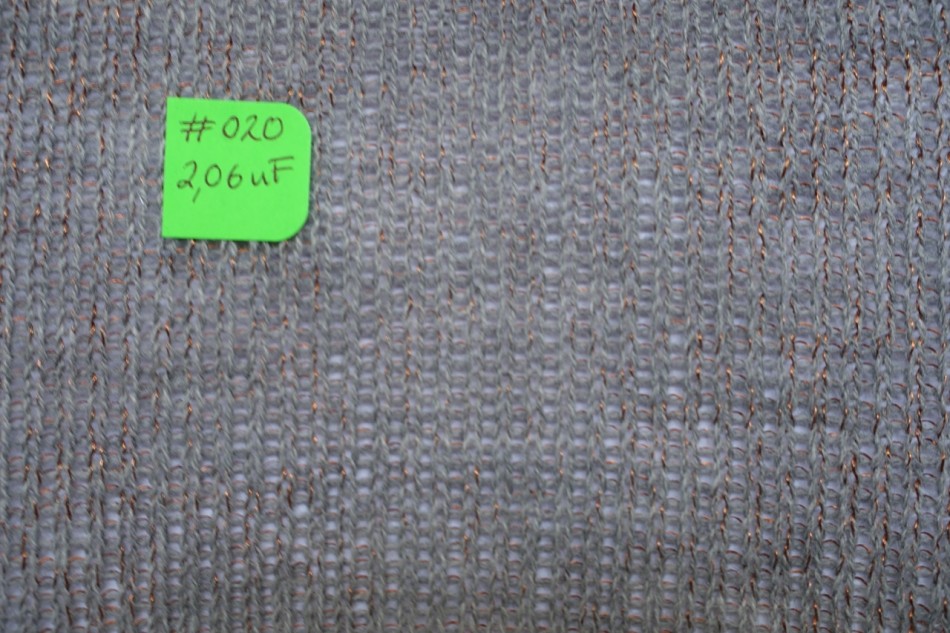 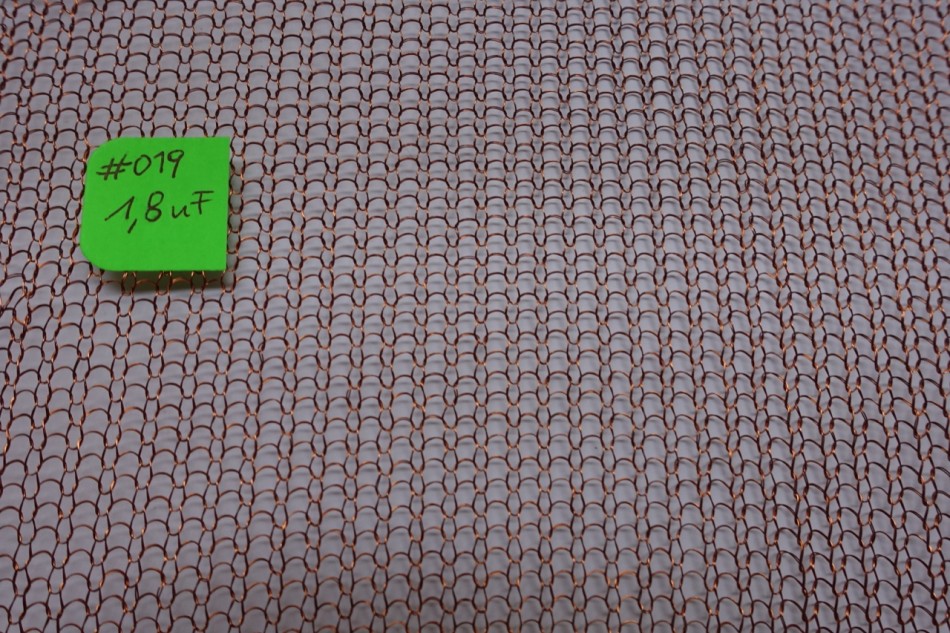 The capacity of #20 is higher, probably because through the extra thread the wires are knitted closer together.

6. Test
Trying using other material and various tensions to minimize the isolation between the wires. 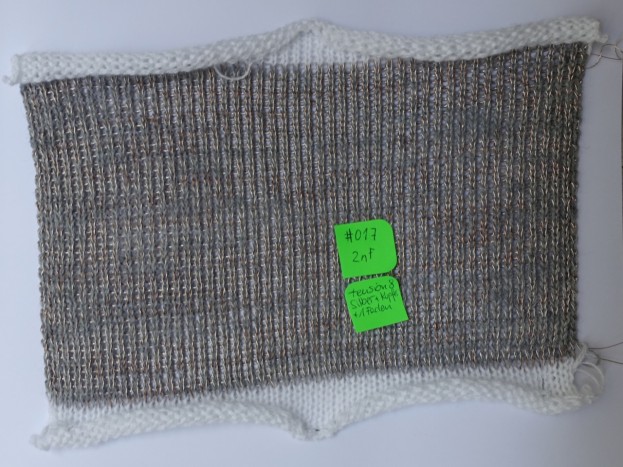 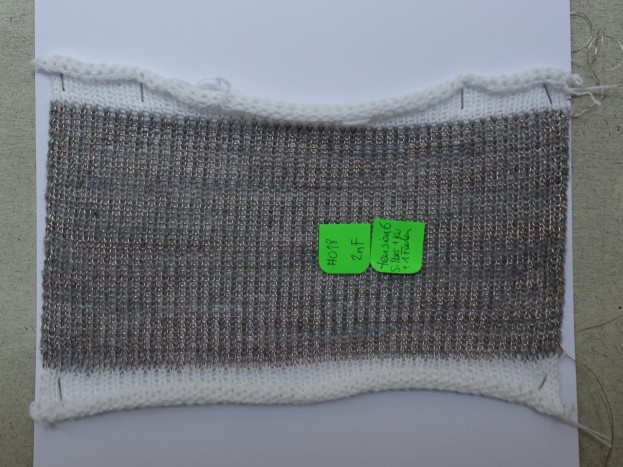