Two oppositely charged parallel conducting plates, separated a small distance apart by an insulator – such as air or a dielectric such as ceramic – create a capacitor.
(Scherz, 2007)

In order to reach higher values, the conducting areas should be as big as possible and the distance between them as small as possible, but insulating reliably. This means highly conductive material should be used to create the plates, and generate a pattern that keeps them as close to each other as possible but has them separated by an insulating material. A material that proved useful for that is enameled copper wire (also known as magnet wires), copper wire coated with a very thin layer of insulation. Initially most well known to produce tight coils of wire for electromagnetic applications and thus widely available, similar materials are also increasingly used in the craft domain. To knit a capacitor, we use two thin copper wires as conductors and their coating as isolating element. They are put together in a pattern that holds the wires and wool close to each other, thus minimizing the distance between them, to mimic the electronic effect trough knitting.

Capacitance is measured in Farrad (F). 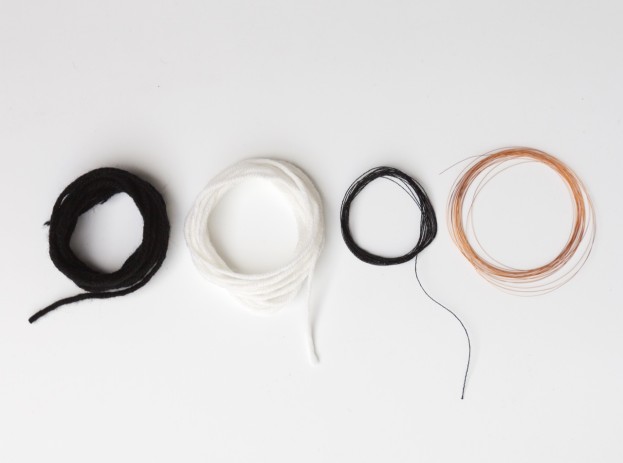 Pattern and Knit Schematic to Knit a Capacitor 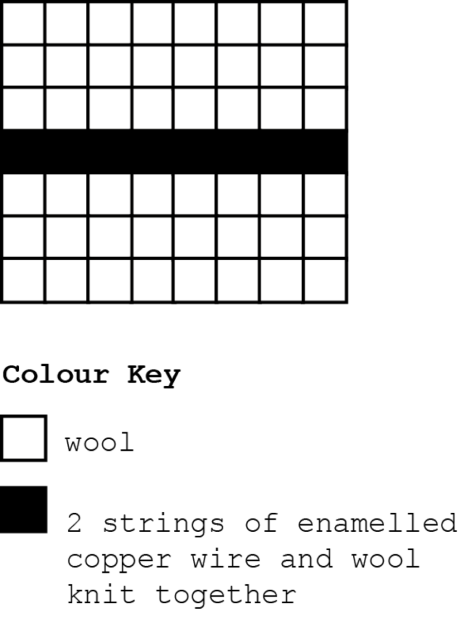 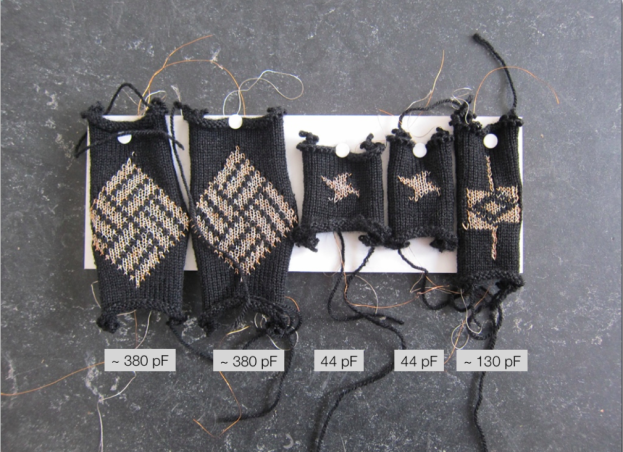 In the context of knitted electronic parts, pattern can be understood threefold. One the one hand it is what that holds the information of what stitches, what colors, what yarns need to be knitted, on the other hand it is the visible result of the abstract description. Additionally it also describes the electronic function of the knitted element. The pattern influences the electronic behavior of the knitted sample, as the electronic function is defined through the positions and amount of the materials used. Whereas diverse patterns are possible to knit desired functions with the materials given, the same pattern knitted multiple times with the same materials results in the same function. Knitted electronic components thus are an example for form inherently also being the function. This results in the pattern being decisive about the electrical values produced and consequently the visual appearance be related to the function.